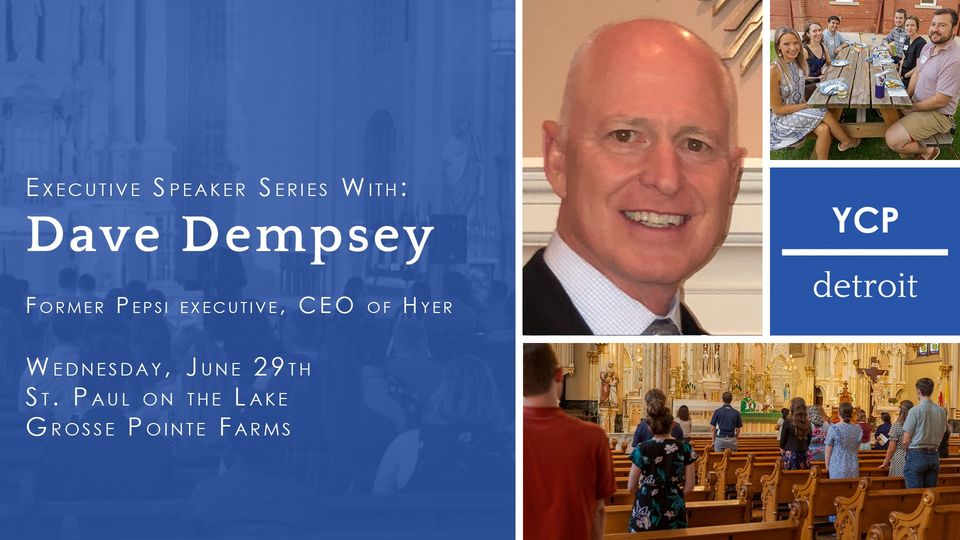 Join YCP Detroit for our monthly Executive Speaker Series event. This month's speaker is Dave Dempsey. Dave will be speaking on being prompted by the Holy Spirit.

EVENT LOCATION:
The event will be held at Saint Paul on The Lake. 157 Lakeshore Rd. Grosse Point farms, MI 48236

Standing at the forefront of expertise and innovation, Hyer Founder and CEO, Dave Dempsey knows a thing or two about fulfilling work. Backed by nearly four decades of executive experience—Dave launched Hyer in 2019 to redefine how work gets done—while empowering people along the way.

Prior to starting Hyer, Dave spent 38 years at PepsiCo, building a strong reputation throughout many strategic and executive roles—most recently serving as the Vice President of Sales Transformation.

Dave enjoys sharing his story about his Catholic faith journey; born into the Catholic faith, however not confirmed until 2005 at the age of 47. Dave along with his wife Colette, are very active in the Catholic faith. He enjoys daily mass, is involved in Teams of our Lady for married couples, Legatus, Domestic Church Media, Opus Dei Executive Men’s retreat in NYC, and many inspiring pilgrimages: Lourdes, Medjugorje, Rome, and Israel.

A graduate of the University of Hartford with a bachelor’s degree in marketing. He works out of Michigan and resides with his wife Colette, in Grosse Pointe Farms. Dave is a proud father of four sons, three wonderful daughters-in-law and 4 grandchildren, residing around the globe.